Q:  What do you think about online music sharing? Do you ever give your music away for free? Why?
A:  Music is already virtually available for free today. The industry has experienced the same kind of irreversible disruption that so many have, driven by technology innovations. Unfortunately, many musicians try to deny and bemoan this, and end up sounding like crusty Yellow Cab drivers railing at Uber. Disruption is inevitable and is good in many ways – it broadens the reachable audience, puts power back into the hands of musicians and greatly (for better or
worse) lowers the barriers to entry for artists. Of course, this means there’s a huge glut of music (of highly variable quality), so you’ve got to be even better to stand out and get noticed. I choose to do music for the sake of the art and the passion, and if money and recognition follow, all the better.

Q: Anything you would like share, from new merch to upcoming shows/tours or
songs/albums?
A:  I’m excited about “Hindsight 2020” – my first release on Guitar One Records. This is a culmination of almost a decade of writing, recording and touring. It’s a great look back at 14 of my best tunes that represent where I’ve been as an artist so far. I’m excited about what’s next!

Q:  Tell us the brief history of your band or musical career?
A:  First inspired by watching my uncle in the Shetland Islands accompanying fiddle players on acoustic guitar, I bought a dime store guitar at age 14 and literally “played it ‘till my fingers bled.” By age 16 I’d saved my summer job pennies to buy a 1979 Fender Stratocaster (which I still have to this day) and made the leap to electric guitar. From there it was high school garage
band playing proms and high school dances, followed by college bands. At some point though, my business career crowded our my art and guitar was relegated to a hobby until many years later when, after realizing corporate advancement wasn’t my passion, I returned to music with a vengeance. I took a sabbatical to attend music school and began to write and record, releasing my 1 st album in 2011 with guitar virtuoso Neil Zaza as producer. Following that release, I’ve released another 3 albums and 10 singles and toured fairly extensively in North
America. I’m thrilled to be releasing a compilation of 14 my best tunes from the past decade or so with “2020 Hindsight”, on Guitar One Records.

Q: What album has had the greatest impact on your life as a musician?
A: Tough to name just one. Somehow I was lucky enough to be introduced to Jeff Beck early on – his albums “Blow by Blow” and “Wired” became ingrained in my musical DNA, as did Boston’s debut album, and “Don’t Look Back.” In fact, I’d say Beck’s influence has shaped my approach to the guitar as an instrumental composer, and many of my melodic sensibilities were grounded in the early work of Boston.

Q: What’s your favorite accomplishment as a musician thus far?
A:  Being able to go from barely filling a 45 minute set with originals to now having literally over 3 hours of original music to share with the world. No easy feat, and an accomplishment I’m very proud of.

Q: What's new in the recording of your music? How has your music changed over the years?
A: My music has become more complex and nuanced over time, as you’d expect. It’s also become simpler; more memorable melodies, better arrangements and even shorter tunes that make a clear, concise statement and don’t just drone on (like so many instrumental guitarists are known to do)..

Q: What inspires you to write the music you write? What made you want to play the instrument you play?
A: Like a lot of writers, my compositions are very much influenced by my feelings, memories or life events. Kind of unintentionally, I’ve ended up naming various tunes based on when (vs. where) they were written (April Song, December Sky, The Long March, November), as they reflect a moment in time, how I was feeling, something wonderful (or difficult) I may have been going
through at the time. I’m also fascinated by the dichotomy that is an inherent part of the human condition – the desire to do right and be good, but the innate struggle and temptation to do otherwise – “Decay &amp; Devotion” - my debut album - reflects that tension to some extent. As far as why I chose guitar – it was just much cooler than trumpet. I played trumpet in high school marching and jazz band and recall just thinking to myself that I’d never get any chicks that way.

Q: If you could play anywhere or with anyone in the world, where or with who would it be?
A: I’d absolutely love to do a UK tour and return to and play in Scotland, my birthplace, as well as the Shetland Islands (where my mother - and my love for guitar – were born). I want to open for / share the stage with Jeff Beck someday. (Jeff, if you’re reading this – please give me a call.) 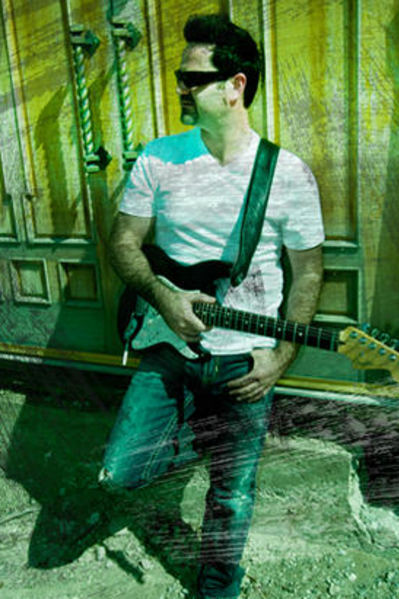