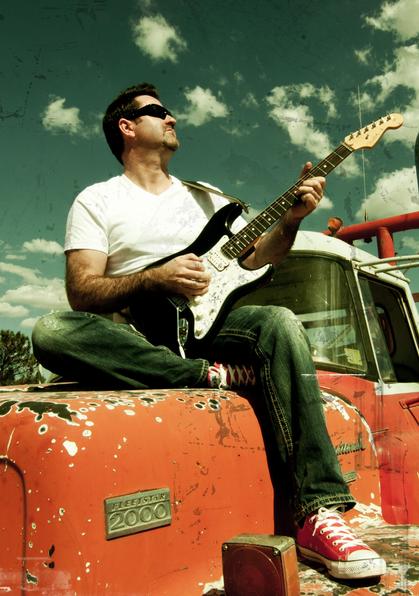 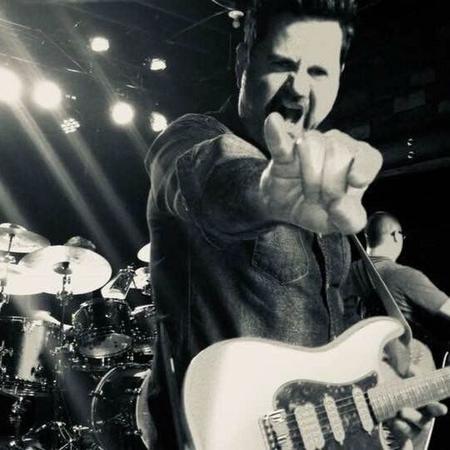 With the release of 2020 Hindsight (Guitar One Records), it is indeed high time for a look back at the progress – and prowess – of electric guitar visionary Grant Ferguson. For five albums now, Ferguson has toted his razor-sharp axe on a fascinating odyssey into all-instrumental
melodic rock, and new fans are still discovering him every day.

It wasn’t so long ago that Ferguson emerged seemingly from nowhere with an artistic style fully realized and ready to roll. From the outset, it was obvious that this new talent was capable of going off on highly original musical forays at the mere touch of a string. His arsenal included the prerequisite wide array of tasty phrasings and monster guitar chops, and plenty of “edge,” but Ferguson performed with a depth and subtlety that pulls all kinds of otherwise predisposed
listeners together into a common musical journey unlike any other in contemporary rock.

Brilliant lead guitar runs can’t all be cut from the same cloth. If every guitarist had the same prescription for proficiency, we’d all constantly be seeking new cures for boredom. No, it’s the
collected experiences of a lifetime that shape and filter those amazing notes as they come through a heart, a brain and into a pair of sizzling fingertips. And that’s the case with Grant Ferguson. Fascinating life!

Fortunate for Scottish-born Ferguson, and for us, he’s the possessor of a verdant intellect. So, though drawn to music and guitar since youth – always heading in that direction – his non-musical talents snuck up and sucked him into a whole ‘nother world. As the dot-com era
unfolded in the ‘90s and early 2000s, and as every business on the planet raced to keep pace with the exciting-but-relentless technology revolution, Ferguson found his smarts in super high
demand. Ultimately, his talents landed him in lofty executive roles for several well-known global companies.

And then? The undertow. Raised on great rock guitar and influenced by the likes of Jeff Beck, Eric Clapton, David Gilmour of Pink Floyd and Gary Moore of Thin Lizzy, Ferguson had ingested styles ranging from hard rock to jazz, blues and pop. They tugged at his desire to pursue his true passion, a re-envisioning of his own thing...a melodic approach to all-instrumental rock. At the very height of his success in the corporate world, Ferguson could no longer resist the pull of
rock ‘n roll. Eventually, he decided to leave the rat race to focus more fully on music.

After cutting the corporate ties, Grant went right back to his first love – music emanating from a Stratocaster. He picked up his axe and began to play again. Actually, he had never totally stopped playing during his years doing 9-to-5. But to brush up his chops he enrolled at the
Atlanta Institute of Music and rocked through there in no time. Shortly thereafter, he met guitar virtuoso Neil Zaza, who would agree to become his producer.

And then it was time. 2011 saw the debut of Ferguson’s first album, Decay & Devotion (Melodik Records), which truly felt like the dawn of a powerful new sound. If songs are stories filtered through distinctively different hearts-brains-fingertips, Ferguson’s works came off like nuanced mini-novels with a soundtrack. No lyrics. These were stories that spoke through six vibrating strings. Reviews of the album’s songs contained descriptions like “propulsive but not overstated, with exhilarating moments” and “...soaring with a hint of darkness.” A new guitar giant was suddenly silhouetted on a limitless horizon...

Over his next three releases, fusion-minded Ferguson definitely took his all-instrumental rock style to a new kind of school. Toward the Light, Departure and Power &amp; Beauty can all be
found on indie label, Melodik Records. Each work shows considerable range to the stories his guitar can tell. Some of his tunes bite into the everyday malaise and rile things up with a unique riff or a harder stance. Other pieces drift off steadfastly toward less earthly realms or celtic highlands. Wherever the musical story goes, he always captures the listener with his ceaseless spirit, his instrumental prowess and a kind of life-embracing maturity.

2020 Hindsight is Ferguson’s fifth album and a timely look back at the aural travels that brought him to this moment. The 14-tune compilation certainly serves well as an outstanding progress report per year 2020. The tracks chosen represent many highlights from the previous releases.

Yet, let’s not call it a “best of” collection quite yet...it’s much more of a temporary checkpoint reporting in on where things stand “thus far.”
As a guitarist, composer and recording artist, Grant Ferguson may have started late, but he isn’t finishing early. He has tales to tell. And many more revelations are still in this man’s musical pipeline. So, get caught up with 2020 Hindsight, if you’ve missed anything so far, then stay tuned...