"Mary Jo is a powerhouse vocalist with a distinctively different, honey-sweet attack who conveys the depths of emotion with each breath as she delivers modern tunes steeped with traditional feel… Front Porch just might launch Mary Jo Curry into the blues stratosphere. Her time is now!

This is music that is able “to find that line between old school blues and modern songwriting,” where tradition brushes up against R & B, Rock and Roll, and Funk. It’s blues that move you, songs that take you for a ride. Mary Jo and guitarist, Michael Rapier, started performing together 9 years ago. Five years later, they enlisted Chris Rogers on bass and Rick Snow on drums. This powerhouse rhythm section provided that magical component that propelled the band’s sound. The four core members have grown beyond being a tight live band, but also into a quality recording and song writing unit. Mary Jo’s first album, simply titled Mary Jo Curry, debuted at Number One on the RMR Classic Blues Chart and held the top spot for three weeks, finishing with 23 weeks in the Top Ten and Number Five for the year 2016! The album had three Number One hits on the RMR Classic Blues Charts; When a Woman’s Had Enough, Steppin’, and Husband #2 while Ooooo Weeee reached Number 2 on the RMR Classic Blues Chart and reached Number 21 in the nation for all genres!

The Mary Jo Curry Band plays regularly in the Midwest and have developed a strong following in the western states after two tours through Nebraska, Wyoming, Montana, South Dakota, Nebraska, and Northern Idaho.
The band has been widely embraced by the Blues Community. Mary Jo’s first big push came from international touring artist, James Armstrong, who told her, “We’ve got to get you recorded.” Armstrong was so confident in Mary Jo’s ability that he volunteered his time and talent to produce her debut album. The album allowed Mary Jo to be introduced to an audience outside of Central Illinois. Great artists like Albert Castiglia, Johnny Rawls, Andrew Duncanson and Tom Holland have sung the praises of the band. Albert Castiglia said it this way: “Mary Jo Curry’s time has come! Her new record will demonstrate that she’s a force to be reckoned with in the blues world. Look out!” Johnny Rawls said “I have sung with Mary Jo many times, and she delivers every time! She has a powerful and soulful voice.” 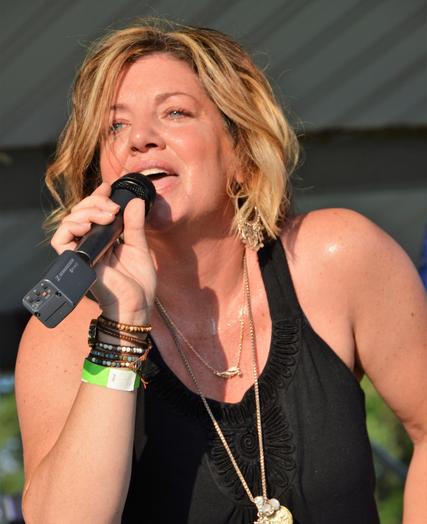 "What hit me the hardest was the absolute sincerity in Mary Jo’s voice.  It’s not at all strained; she’s making no attempt to emulate anyone.  What you get here is 100% Mary Jo Curry…and she gives it all she’s got… Mary Jo Curry is, without question, the real deal…and is backed by a killer band. "

"“Front Porch reveals the versatility of Curry’s vocals with an equally versatile group of musicians and proof that this band established themselves in the blues world."