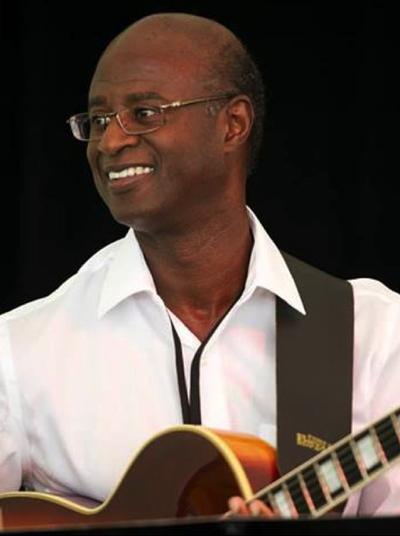 “Art and music, sight and sound, The Art of Life is for all of your senses. This recording brings a variety of sounds to your aural palette and like a good painting, can make you think, imagine, and maybe, smile.”

Guitarist and composer, Norman Johnson was born in Kingston, Jamaica, and became interested in playing the guitar in his freshman year of high school after a friend let him borrow a recording of George Benson’s “The Other Side of Abby Road.” Norman recalls, “I was mesmerized by his sound and became addicted to the record. I decided to try learning to play the guitar but in the back of my mind I figured I was too old to start an instrument and I only was 16! I figured I had to catch up to my friends who had been playing music for much longer, so I practiced as much as I could and quickly became proficient.” His other early influences were Wes Montgomery, Earl Klugh, and r&b groups Rufus (with Chaka Khan) and Earth, Wind and Fire. Norman’s love for playing the guitar influenced his decision to enter a music program for college. He studied at the Hartford Conservatory of Music with Bob Shaw for guitar and the Hartt School of Music taking classes with Jackie McLean and the award winning guitartist/composer Brian Keane. Johnson’s virtuosity on the guitar led him to listen to other styles of guitar, which gives him his unique sound. “I have always had a love of the classical guitar,” said Norman. “I saw Segovia perform in the 1970s and fell in love with the voice of the nylon string guitar and have always tried to impart some of that flavor in my playing. Earl Klugh came out of this same tradition and that is the reason he has been a big influence on me.”

An east coast resident and always active in the music scene, the Norman Johnson Group won the Hartford Advocate “best jazz” in 2000 and in 1998 Norman won the Communicator Award for “Otis in China,” a composition he wrote for Otis Elevator. His debut solo release on the Pacific Coast Jazz label, If Time Stood Still, is an exquisite expression of music that has been waiting to happen. With over twenty recordings as a sideman, playing with highly respected musicians (Dave Brubeck, Jerry Bergonzi, Bill Mays, Harvie S., Phil Wilson and Steve Gadd) along with composing and recording music for corporate clients, this release puts Norman Johnson in the spotlight he truly deserves. If Time Stood Still is well worth the wait with original songs in the genres of contemporary jazz, smooth jazz and Latin grooves along with the Pat Metheny cover tune, “Always and Forever.” “It’s Time To Fly” from the CD reached #19 on the Groove Smooth Jazz National Charts and the CD ended the year 2010 at #35.

Johnson’s 2nd release is “Get It While You Can” on the Pacific Coast Jazz Label. It was released in 2013 and the title track reached #43 on the Nielson Smooth Jazz National charts.

Johnson's newest release is "The Art Of Life". The single "Old Skool" reached #46 on the Groove Jazz charts.

As an educator, Johnson taught music at Manchester Community College, The Greater Hartford Academy of the Arts, and was the Dean of the Hartford Conservatory of Music and Dance for over nine years. He was also a teacher at the Artist Collective in Hartford, CT, which is an inner city arts school, founded by Jackie McLean’s wife, Dolly.  He is the owner of the recording studio, Manor Recording where he records and produces local and national artists.