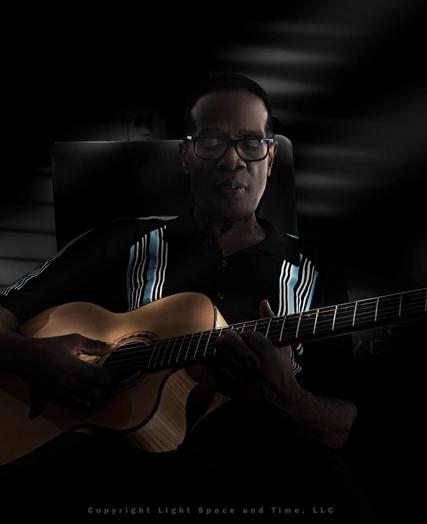 Skip Bauchman might be the only jazz artist you’ve ever heard who joined forces with the Secret Service to protect three Presidents – Carter, Reagan and Clinton – as part of the Anti-Terrorist unit of the LAPD. All throughout his 32 year career in the department—which included stints in narcotics, gang units and homicide—the Los Angeles born multi-instrumentalist (guitar, drums, bass, keyboard programming) played gigs whenever he could, including celebrations thrown by his fellow officers. Over the years, he has also played with numerous bands in many different genres, from R&B/funk to contemporary jazz.

Two years before his retirement in 2009, he gathered his friends, veteran musicians Rodney Taylor (sax), Henry Battle (sax) and Edell Shepherd (keys)—a pal and musical compatriot since the two were 14 years old--to record his long awaited debut album under the group name B&B Jazz Company. Bauchman described the vibe of the ten track Soul Menu On Back as “the Crusaders meet Tower of Power after lunch with Bootsy Collins.” Shepherd’s extensive resume includes stints with everyone from The Gap Band to Barry White.

Over the years and while he was still a police officer, Bauchman heard this every time he entered a recording studio to do a session: “Isn’t he a cop?” “Yeah, but he’s cool!” Finally having the time to dedicate to pursuing his musical career full time, Bauchman and his band—recording under the moniker Skip Bauchman and the B&B Jazz Company--are back with the even more delightfully eclectic Universal Vibe, a joyfully schizophrenic celebration that starts with some in the pocket, sax driven jazz funk but expands to show Bauchman's dynamic abilities on guitar and drums and his affinity for rock, jazz fusion, chill/electronica, old school soul-jazz, blues, TOP-flavored horn jams, Middle Eastern music, Latin jazz and Brazilian music.
“An independent group like ours could make an attempt to gain attention by sounding like other artists and fitting into strictly tailored formats,” says Bauchman, a largely self-taught musician whose education came from church and listening to the radio. “But that didn’t seem very interesting to us. The Universal Vibe idea makes sense because of the way people consume music these days. Everyone has something you wouldn’t expect on their iPod. The album goes in many directions but that means a little something for everyone. That’s the way I play live too, taking risks, doing unexpected things because it’s fun. I love everything from Sinatra to Zappa, and being around the music industry for many years and living a lot of life has exposed me to a lot of different styles and grooves. I’m always picking up new ideas and it’s exciting to have an opportunity to do that now with such great players. There was no roadmap when we started Universal Vibe, which made it even more exciting as it developed. It left a lot of room for new ideas and spontaneity.”