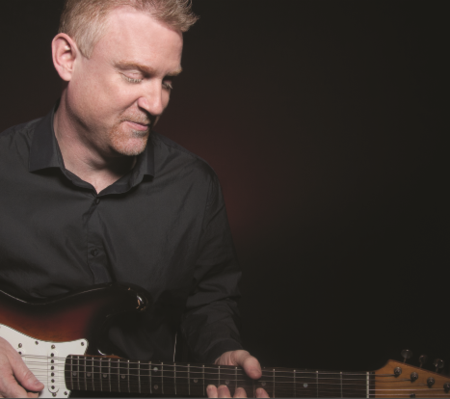 Q:  What album had the greatest impact on your musical career?
A:  I would have to say SRV “In Step “ and a “Best Of Clapton “ collection. I forget what it was called. But it had his version of “Have You Ever Loved A Woman” From The Layla album. It just blew me away and still does really.

Q: What’s your favorite accomplishment as a musician to date?
A: Definitely recording with some of the musicians I’ve been able to record with. Having Nathan East, Anton Fig, Stu Hamm, Kenny Aronoff, Shawn Pelton, Andy Snitzer, Jerry Portnoy, Bruce Katz, Michael Powers, and Gerald Albright contributing to my records is amazing. Some of the most memorable concerts in my life had these guys playing in the band. So to work with them is a real honor.

Q: If you could play with anyone in the world who would it be?
A:  Clapton. I would love to just play some blues with him. His playing is always so tasteful. I would be pretty happy just playing rhythm guitar behind him and try to understand how he can play so little and say so much.

Q: How has your music changed over the years?
A: It has changed dramatically. It seems with each year I become less interested in virtuosos in the traditional sense. I have really embraced a more minimalist approach in both listening and playing. I like a great guitar player as much as anyone else does, but I love an understated display of musicianship more these days. It’s that knowledge versus wisdom argument.

Q: What made you want to play the guitar?
A: Plain and simple....I wanted to be in Kiss when I was a kid. That’s what made me buy my first guitar. It evolved past that pretty quickly. But that was definitely the initial inspiration.

Q: What are the biggest obstacles you face as a musician?
A: I would have to say finding the right audience. I think there are so many sub-genres of music that it’s difficult to target the right listener. I think a living can still be made in music, but it has obviously changed so much that you have to really target who your audience is. There’s so many great musicians out there. But the infrastructure of the music industry has disappeared. It makes it difficult for most to make even a little headway.

The B. Christopher  Band Artist interview