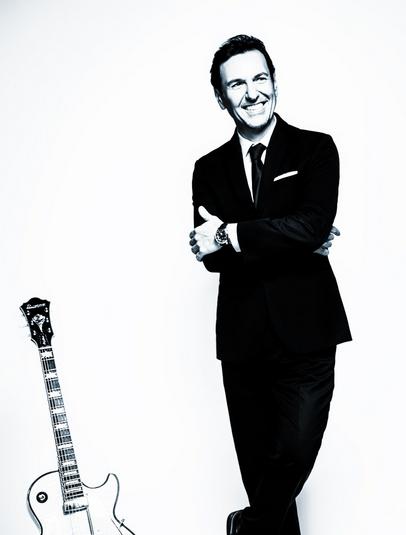 There are only a few established artists who are capable of reinventing themselves and jazz guitarist and Billboard chart-topper U-Nam is certainly one of them.  As if to prove it he will release the genre busting “U-Nam Goes Big Band”, 03/27/2020, on the Skytown Records label.

Coming off the back of a scintillating 2019 that saw him enjoy huge chart success with his 2 sensational albums “Future Love Parts 1 and 2” (that reached #20 on the Top25 Billboard Jazz Best Selling Album Chart and #8 in the Contemporary Jazz category) this is an exciting new direction for U-Nam to take but, with nine Top30 Billboard radio hits already to his name and an approach recognized as always innovative and often daring, his reputation for shaking the musical world to its core is already firmly in place.

“U-Nam Goes Big Band”, a sumptuous eleven track rendering of sophisticated mood jazz, is made even more enticing by the amazing back-story that first put it on U-Nam’s radar. A phone call to his Los Angeles studio from Estonian producer Mikk Targo is all it took. Targo, CEO and Founder of the Estonian Author Society EAU had, for the past several years, been working with a panel of music industry experts to select from what was generally regarded as the best one hundred songs Estonia has ever produced. As they did so a body of work emerged that was not only a glimpse into the nation’s musical heritage but also an outstanding showcase for the renowned Lutz Krajenski Big Band.

The resultant album was released in 2016 accompanied by a “behind the scenes” television documentary yet Targo knew that if the project was really going to be a global smash a different approach would be required. Having heard his music played extensively on radio Targo was already a huge fan of U-Nam’s work. When he explained his desire to transform what he already had into something altogether more jazzy, the prospect of creating Sinatra like, bossa nova tinged, big band driven music that crossed seamlessly over to instrumental jazz was, for U-Nam, just too good to miss. In addition it offered him an avenue to get back to why he had got into music in the first place.

To understand why this recording could not happen sooner, or what prevented songs of such potential from finding their way to the world’s best artists; one has to understand the political landscape of the time where the all-pervasive Soviet regime excluded any such possibilities.

All that changed in 1991 when the country was finally recognized by the USSR as an independent state. Artistic freedom was restored and as part of that the first tentative steps were taken to bring some of Estonia’s best songs to the notice of a worldwide listening public.

The musical magnificence of U-Nam is epitomized by the opening number, the luxurious “Something Right” where his interplay on guitar with the immaculate seventeen-piece big band lays down a marker that is replicated throughout. This is particularly so with “Beautiful, Beautiful” that finds U-Nam at his finest and again with the ultra smoky “Dance”that glides along on a delicious mid tempo beat.

The sultry “Each Day’s a Gift” is delivered first as an exciting instrumental then later with vocals from the inaugural winner of the X-Factor UK TV Show Steve Brookstein. It is one of two vocal tracks with the other being “The Dance Must Go On” where Susanna Aleksandra evokes the aura of a New York supper club circa 1946.  In every respect it is a musical extravaganza and much the same can be said of the warmly inviting “When You Fall In Love” that begins with musical sparring between Lutz Krajenski on piano and U-Nam on guitar.
It ensures a romantic opening to an otherwise upbeat track while elsewhere the dramatic first bars of “The One” lays a path to a Latin groove that U-Nam generates with his trademark playing style.

When the rhythm eases and the mood becomes relaxed the consequence is the wonderful “Saaremaa” and although the whimsical “In the Blink of an Eye” really swings it is the easy grooving “The World to Me”, fuelled as it is by a picture perfect and understated brass section, that impeccably encapsulates what “U-Nam Goes Big Band” is all about. 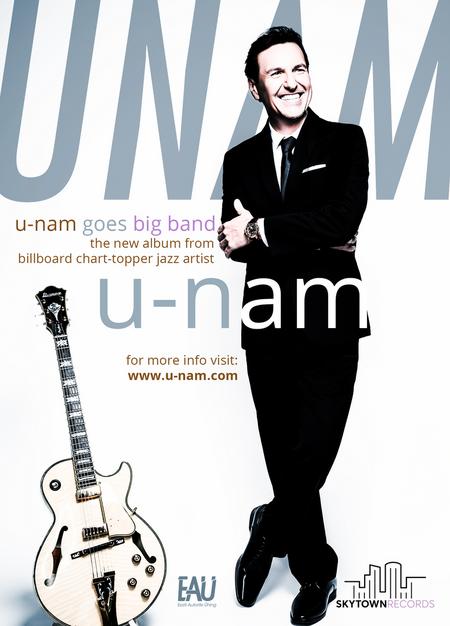