Q : What’s your favorite accomplishment as a musician thus far?

A : I’m proud of all of my work but my latest record, LIGHT OF DAY, holds a special place in my heart as it’s my biggest accomplishment as a producer to date and I think, to a great extent, reflects my evolution as an artist, songwriter, producer, and most importantly as a human being.

Q : What's new in the recording of your music? How has your music changed over the years?
A : Well, over the course of these three records I have been steadily improving my home studio and improving my engineering chops in the process as well. I’ve got a pretty spiffy studio setup now and can record most things at home. This allows me to work on my own schedule and saves me tons of money on studio time which is often one of the greatest outlays in producing a record.

From a musical standpoint, as I’ve gotten older, life has provided me with a broader range of experiences and emotions to draw from and thus a wider cast of characters to appear in these little plays I write that we call songs. I also like to think that my playing has taken on more emotional depth over the years; I just have so much more to draw from...

Q : What inspires you to write the music you write?  What made you want to play the instrument you play?
A : I draw inspiration for stories from life itself. Things I see, hear, feel, or sometimes just stories/scenarios I imagine through other’s eyes. I don’t have any set process or regimen for writing outside of just trying to make it a point to capture ideas in some medium as quickly as possible before they get away. The digital revolution has been great in that regard. I have a tiny studio in my phone and can do full mixes on my iPad!

Grooves, on the other hand, are an entirely different beast. Sometimes I can hear grooves in the squeal of my windshield wipers against my windshield or even my turn signals clicking, even clothes bouncing around in the dryer... I’m like the guy with the hammer; I hear grooves everywhere!I was always drawn to the guitar since before I can remember; I don’t know why... I stretched rubber bands around a shoebox when I was two years old and have always been enamored of vibrating strings. Perhaps, what made the guitar want me to play it might be the better question?

Q : If you could play anywhere or with anyone in the world, where or with who would it be?
A : I would love to jam with Billy Cobham, Lenny White, perhaps Joey DeFranceso. Eric Gales comes to mind as well but only if he agreed to tie one hand behind his back! There’s also a cat on the East Coast, Clarence Spady, that I would love to share a stage with someday.

Q : What do you think about online music sharing? Do you ever give your music away for free? Why?

A : I have mixed feelings in that regard. On the one hand, the digital revolution has sharply reduced the costs of producing records and made it possible for artists to reach listeners around the globe literally for free. While on the other hand, music sharing and to perhaps an even greater extent, music streaming, has devalued music to the point that it’s not really viewed as a commodity by many consumers.

The music industry overall is experiencing a paradigm shift in the ways that music is packaged and delivered to consumers. As artists we have no choice but to change with the times or be left behind. The upside in my opinion is that this will ultimately open up new creative avenues and provide new and exciting ways for us to interact with fans.

I have literally seen sites that have your picture, your bio, links to your site, and then free downloads of your music. I wrote to one guy that was doing that with my second album just a few days after I released it and politely broke it down to him. I explained that what he was doing actually makes it harder for independent artists like myself to continue to make records. I explained to him that if he really wanted to help, why not provide links to where people can buy the music rather than giving it away. He actually complied and I thanked him.

Another way I look at it is that piracy, underneath it all, is just another form of promotion. Some people are just never going to pay for my music, but I still get my message across to them, which is ultimately the point…

I’ve had free tunes on my site for many years. I temporarily retired that page when we built the new site as a lot of the audio was low quality and I really want to up the ante. Just because it’s free doesn’t mean it has to sound like crap! I do intend to continue giving away songs for free on a regular basis moving forward; it’s not all about the money. I have hours and hours of live material, demos, outtakes from my records, songs that I want to release as free singles, and a bunch of other stuff that I want to share. I think it’s important to keep people interested in the music and if there’s any selfish aspect to it, it’s just that I get to work on my mixing and audio restoration chops a lot more in the process!

Q : Tell us a fun fact about yourself.
A : As far as I know, I’m the only Nigerian-American Bluesman that has worked both with Buddy Guy as a guitarist and in Silicon Valley as a Software Developer.I’m also a kitchen gadget geek. I buy all kinds of kitchen gadgets many of which rarely ever get used. On Black Friday, I had to talk myself down from buying this Ninja Foodie pressure cooker thingy I keep seeing that’s also an air fryer and does a bunch of other stuff. I already have two pressure cookers AND an air fryer but that crispy chicken skin in the ad is still calling me. Amazon same-day delivery doesn’t help things either…

Q : How do you promote your band and shows?
A : Absolutely, I love playing intimate gatherings in spite of being kind of shy; there’s a contact page on my site, www.vinceagwada.com, or drop us a line at booking@vinceagwada.com.

Q : What song do you remember most from your childhood?
A : I have relied heavily on social media for promotion for years. Recently, I’ve been leveraging Facebook ads to great effect. They’re really a great value and very effective for targeted promotion.My ultimate online headquarters is my website though, www.vinceagwada.com. We just built a new site from scratch right before the release of LIGHT OF DAY this past summer and I’m very proud of and excited about the new look. You can always get the latest news, interviews, reviews, tour dates, and order merchandise from there. 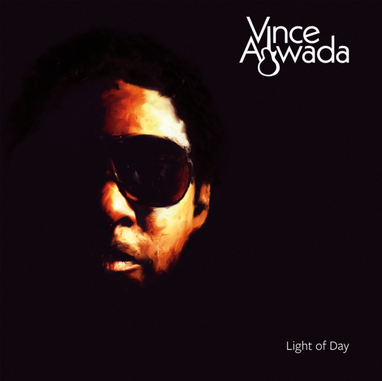 Q : Tell us the brief history of your band or musical career

A : I grew up on the Southside of Chicago where I became interested in Blues at an early age. In my late teens, I found my way to Theresa’s and Buddy Guy’s then club, the Checkerboard Lounge. I would put my Mom’s mascara on my moustache to try and look a little older. I must have looked pretty ridiculous! I played in the house bands of both clubs for some years and that’s where I cut my teeth in music. I was truly blessed to have come up at a time when so many legendary players were still alive. Most of my associations and friendships in the music business trace back to those roots.

I have had the good fortune to have toured and recorded as a sideman with some of Chicago’s finest artists, across many genres, for many years. I released my first album, “Eyes of the City”, in 2008 and have performed almost exclusively as a leader since that time.

One of my biggest non-musical influences would have to be Muhammad Ali. His was truly a life of purpose far beyond boxing. He was a shining example for young Black Men of my generation on how to be proud and fearless with dignity and grace.

Q : What album has had the greatest impact on your life as a musician?
A : Hands down, Jimi Hendrix’s “Band of Gypsies”. That record has informed so much of what I do. It’s like a bible on ensemble playing and “Machine Gun” is just the epitome of electric guitar playing. That album has been a treasure trove for me and I never tire of listening to it even to this day. I religiously listen to “Machine Gun” on the way to gigs and it’s all the “attitude adjustment” I will ever need before going onstage!

Q : What song do you remember most from your childhood?
A : One of my earliest memories of music is “Don’t Let the Rain Come Down” by the Serendipity Singers. My Mom really loved that song and I can remember her being happy and dancing around the house when it would come on. I witnessed the power of music very early in life…

Q : What is the best way to stay updated on current news; gigs, releases, etc.

Q : What's next for your band?
A : Right now, we’re primarily focused on promoting the new release, LIGHT OF DAY, and booking tour dates. I’ve been writing and recording material for a couple of new projects: my next album and a Traditional Chicago Blues all-star project I’ve been wanting to do for a very long time.